On May 3, 2019, Music at the Institute presented the final concert of the season From Europe with Love. 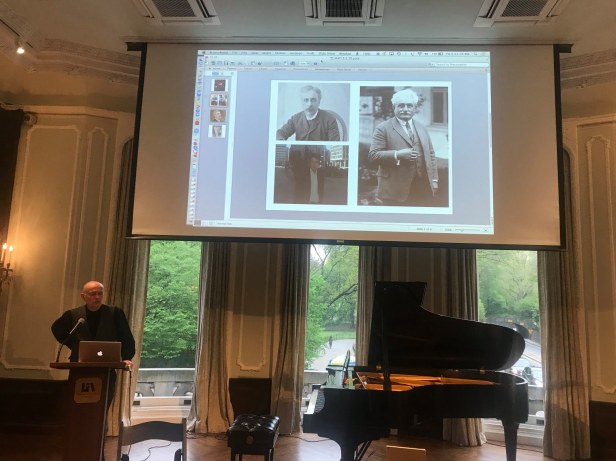 *World Premiere. Commissioned by the Ukrainian Institute of America in celebration of the 30th anniversary of MATI.  FULL PROGRAM.

Violinist SOLOMIYA IVAKHIV, hailed by critics for her “crystal clear and noble sound” (Culture and Life, Ukraine), enjoys an international career as a soloist and chamber musician throughout Europe, North America, and China. She has performed at Carnegie Hall, Merkin Concert Hall, CBC Glen Gould Studio, Curtis Institute Field Concert Hall, Italian Academy in New York City, Pickman Hall in Cambridge, MA, San Jose Chamber Music Society, Old First Concerts in San Francisco, Astoria Music Festival (Portland), Tchaikovsky Hall (Kyiv), and at UConn’s Jorgensen Center for the Performing Arts. Ms Ivakhiv has made solo appearances with the International Symphony, Istanbul State Orchestra, Charleston Symphony, National Symphony Orchestra of Ukraine, Lviv Philharmonic Orchestra, Hunan Symphony Orchestra in China, the AACC, and the Bach Festival Orchestra. Her recent album, Ukraine-Journey to Freedom, with pianist Angelina Gadeliya, released on Labor Records with NAXOS of America was featured among the top four classical albums on iTunes. Most recently, Ms. Ivakhiv completed a highly acclaimed tour in her native Ukraine with Dutch cellist Joachim Eijlander and performed on Netherlands National Public Radio.  Ms. Ivakhiv is currently Assistant Professor of Violin and Viola and Head of Strings at the University of Connecticut and Professor of Violin at the Longy School of Music. Solomiya Ivakhiv graduated from the Curtis Institute of Music in Philadelphia, where she studied with Joseph Silverstein, Pamela Frank, and the late Rafael Druian. During this time she was concertmaster of both Curtis and Tanglewood Center Symphony Orchestras. Ms. Ivakhiv holds a Doctor of Musical Arts degree from Stony Brook University where her principal teachers were Philip Setzer and Pamela Frank.

Since making her solo debut with the Philadelphia Orchestra as a teenager, violist CAROL RODLAND has established a distinguished international career as a concert and recording artist and pedagogue. Fanfare Magazine describes her playing as “larger than life, sweetly in tune, infinitely variegated” and “delicious,” and her recordings on the Crystal and Neuma Record Labels have been critically acclaimed. A passionate advocate for contemporary music, she has commissioned, premiered, and recorded works of Kenji Bunch, Dan Coleman, David Liptak, Christopher Theofanidis, and Augusta Read Thomas. A dedicated teacher, Ms. Rodland is Professor of Viola and Chamber Music at the Juilliard School. She is also an artist-faculty member at the Perlman Music Program, the Bowdoin International Music Festival, and the Karen Tuttle Coordination Workshop.   Previous positions have included professorships at the Eastman School of Music, where she was also Co-Chair of the String Department, at New England Conservatory, where she was recognized with the “Krasner Award for Excellence in Teaching,” at the Musikhochschule “Hanns Eisler” Berlin, and at Arizona State University. In 2009, Ms. Rodland founded “If Music Be the Food…”— a fully volunteer benefit concert series, whose mission is to increase awareness and support for the hungry in the local community through the sharing of great music and to teach music students about the importance of utilizing their art for service in their communities.

YVES DHARAMRAJ has earned a worldwide reputation as a dynamic cellist who blends an immaculate command of the instrument with deep musical understanding to express his fresh and elegant interpretations. As soloist, recitalist, chamber musician, and teaching artist, the Franco-American cellist enjoys a multifaceted career that takes him to the major stages of the United States and abroad, including appearances at Carnegie Hall, and Lincoln Center (New York); the Kennedy Center (DC); Orchestra Hall, Ravinia Festival, and Chicago Cultural Center (Chicago); Disney Hall (LA); National Arts Center (Ottawa); Berliner Festspiele; Téatro Nacional (Dominican Republic); Panama Jazz Festival; and the Thailand National Cultural Center (Bangkok). A top prize winner in the Ima Hogg, Irving M. Klein, Florida Orchestra, Juilliard, and ASTA competitions, Mr. Dharamraj has appeared with the orchestras of Houston, Green Bay, Edmonton, Florida, Dominican Republic, and Juilliard, with which he performed William Schuman’s A Song of Orpheus at Avery Fisher Hall as part of the Juilliard School’s Centennial Celebration. He is equally in demand as a chamber musician and has collaborated with such artists as Sir Simon Rattle, Itzhak Perlman, Miriam Fried, Christian Tetzlaff, Cho-Liang Lin, Gilbert Kalish, Ralph Kirshbaum, Mischa Dichter, Isabel Leonard, and members of the Emerson, Cleveland, Guarneri, and Orion Quartets. As an artist also dedicated to the performance of contemporary music, Mr. Dharamraj is a founding member of the genre-defying Bohemian Trio and indulges in the avant-garde as the cellist of Ne(x)tworks. He is a member of the Decoda chamber collective and cofounded the New Docta International Music Festival in Cordoba, Argentina in 2013 to mentor and nurture Latin American talent. Yves Dharamraj was a pupil of Aldo Parisot at Yale University where he graduated cum laude with a Bachelor of Arts in History (Medieval Mediterranean Studies), a Master of Music, and an Artist Diploma. He further studied in Joel Krosnick and Darrett Adkins’s studio at the Juilliard School, where he earned his Doctor of Musical Arts degree.

Pianist GILBERT KALISH leads a musical life of unusual variety and breadth. His profound influence on the music community as educator and as pianist in myriad performances and recordings has established him as a major figure in American music making. A solo artist who has released over 100 recordings, he is also noted for his frequent appearances with many of the world’s most distinguished chamber ensembles and for his collaboration with soprano Dawn Upshaw, cellist Joel Krosnick, and, above all, mezzo-soprano Jan de Gaetani. Mr. Kalish was the pianist of the Boston Symphony Chamber Players for 30 years and a founding member of the Contemporary Chamber Ensemble, a group devoted to new music that flourished during the 1960s and 70s. In 2007, he was invited to be an artist member of the Chamber Music Society of Lincoln Center. He has performed recitals in most of the major musical capitals and also appears as soloist at many leading music festivals, including Mostly Mozart in New York and the Brighton and Aldeburgh Festivals in England. He has given world premieres of works by Elliot Carter, George Crumb, Charles Ives, Leon Kirchner, George Perle, Ralph Shapey, and David Diamond. Columbia, Desto, Folkways, Acoustic Research, Bridge, and Nonesuch are among the many labels for which Mr. Kalish has made numerous recordings of solo works, chamber music, and as accompanist. His recordings encompass classical repertory, 20th century masterworks, and new compositions.

Alain Frogley teaches music history at the University of Connecticut, Storrs, and in 2008 was Visiting Professor at Yale University. In 2005-6 he was a Fellow of the American Council of Learned Societies. His research has centered primarily on British and American music of the late-nineteenth and twentieth centuries, and on Beethoven. Recent interests include British music in Nazi Germany, racial Anglo-Saxonism in music, and the relationship of music and the imperial metropolis. A contributor to the New Grove dictionary, Dr. Frogley has also edited Vaughan Williams Studies for Cambridge University Press and published a monograph on Vaughan Williams’s Ninth Symphony for the Oxford University Press series ‘Studies in Musical Genesis and Structure’; he has just finished editing, with Aidan Thomson, the Cambridge Companion to Vaughan Williams. He has lectured at Carnegie Hall and the Kennedy Center and has presented BBC radio series on British and American music.