Art at the Institute, the visual arts programming division of The Ukrainian Institute of America, presented its first exhibition of the Spring season on Friday evening, March 23, with an opening reception introducing eloquent landscape paintings, titled Silence, by Kyiv-based contemporary artist Oleksiy Lytvynenko. Curated by Walter Hoydysh, PhD, director of Art at the Institute, the exhibition marks the artist’s first solo showing in the United States.

Ever drawn to the fluidity of the natural world and its capacity for self-renewal, Oleksiy Lytvynenko finds systems and design in nature which he translates into art. His paintings combine organic elements within a framework that is deeply atmospheric and mysterious, and where abstraction and realism are neither separate nor incompatible. He moves ably from states of confinement to states of constant change, from replication to improvisation and visual uncertainty.

Exploring recurring motifs of landscape, water, plants, insects, fish, and amphibians, the artist sees the human — beginning with himself — as an integral part of nature. The affinity between man and nature is what impresses Lytvynenko most, rather than their contrast. He plainly understands his duty as an artist to suggest the essence, the eternal qualities of the aesthetic subject, which is in itself a work of natural art even before he arrives. These paintings adequately exalt anthropocentric personality.

The exhibition’s multi-panel paintings take on a quietly spiritual aura in their contemplative examination of earth’s changes and riches, an atmospheric glimpse of the landscape with an expansive spatial depth. Some of his paintings are triptychs with three sections horizontally juxtaposed, others are polyptychs, including four or five panels. As viewers, we are initially drawn in by their sheer scale and beauty and the seeming ease of execution, and then challenged by the compositional relationships of the motifs and abstracted backgrounds, or the unexpected complexity of our emotional responses.

There are countless details to absorb; the way the connections are made from one canvas to another, the way that elements overlap in perfect, random harmony. There’s an appreciation for the artist’s ability to orchestrate the happy accidents of fate and the careful management of the density of color and composition. While appropriating spatial concepts and clarity from both Western and Far Eastern repertoire, Lytvynenko successfully manages to avoid cliché. He practices an economy of means, directness, simplicity, and spontaneity to evoke an immediate and personal experience of the natural world.

Oleksiy loves art and cherishes natural phenomena. That passion and enthusiasm spread throughout the conversations we carried during the evening of his reception. There are very few artists who can sit inside themselves and not feel threatened or envious. One of his goals is to paint objects not only for what they are but for what they may suggest, and his pictures teem with symbolic and metaphorical allusions. His interpretation of what he sees is the of view nature as a miracle, a prayerful intercession before it and the greatness of its mysteries.

Silence in Lytvynenko’s paintings is among the central themes and characters of his world. It is not just the lack of sound. In our consciousness, associations link silence with unspoken prayer as a tacit conversation with God and the notion of initial chaos on the eve of the natural world’s creation.

This search for spiritual transcendence continually influences Lytvynenko’s creative vision. He durably expresses our relationships with one another, with the natural world, and with the infinite. Drawing references from Western and Eastern schools of philosophy, the artist seeks to make works that are objects of contemplation. Having undergone a process of creation, destruction and finally preservation, the stillness of meditation is echoed in the quietude of the finished paintings. Plants and creatures that transform are arranged to symbolize the enduring pattern of regeneration. The results are both peculiar and sublime.

Delicately nurtured by knowing hands, Lytvynenko’s use of subtle color harmonies, twilit illumination and fluid drawing mark his belief in the importance of beauty in our lives. His subjects are used as links between the viewer and the artist’s sensibilities; to see and be seen. Hence, they don’t reveal themselves immediately. The eye can wander, and the mind can think, unencumbered, through visual realms that are expansively and emotionally rich — the sincere and unabashed offering of pleasure and solace.

These suggestive paintings connote a broad range of emotions — from cool days of spring, to the opulent plenitude of midsummer, to the melancholic twilight of a single blossom or bud. In practice, the painter walks a fine line, never allowing for a creative complacency in what would otherwise be a prosaic motif.

Lytvynenko has a highly developed consciousness of what is contained and not contained in his objects, creatures and landscapes. Instead of narrative or story, attention is caught by an isolated presence. These subjects fail to take root in their environment; sometimes they feel lost in it. But for the way the painter frames and proposes it as such, the viewer might not be receptive to the grey cloud, the abandoned dark earth, the leafy barrier, or the snowy entanglement as an affecting scene. It is an odd, decentered outcome for someone with an approach as intimate as his.

Lytvynenko recovers the natural beauty of north greater Ukraine, through the ecstatic magic of its water and landscapes, the quintessence of landscape painting: nature here is composed and decomposed by the rhythm of the mist, under a milky light, in which forms emanate from the invisible anticipating the presence of an indefinite elsewhere. The paintings don’t point to a far shore — they don’t offer security or comfort, and they don’t promise to reveal the next image or place.

The pictures do not refer to a specific place, but rather to an emotional place. This is a visually allusive painter. By showing us a bud, a field, a pond, or creature, he is bringing us into this emotional world very much the way poetry does. Were these paintings about named places and familiar turf they would be easier to interpret. In such a case, we could say that he exhibits an attitude, or has an opinion about condition. Perhaps, he merely wants to make a record of natural material.

It’s by no accident that the artist chooses nature as his interpretive material. Both Lytvynenko’s uncle and grandfather were artists. Both grandmothers were biologists, his mother a biologist, and his father an ichthyologist (a specialist in the zoological sciences who studies fish). Another uncle was a geologist. The future of the artist’s knowledge of natural science was deepening throughout his childhood pouring over his parent’s library, and, images of animals and birds surrounded him in his grandfather’s studio. Further inspired by his uncle’s studio, the itinerant painter turned to an exuburent kind of abstraction, where he remained.

In devoting himself to botanical motifs, Lytvynenko allies himself with one of the most constant universal and symbolic themes in art. Every culture and religion incorporate the symbol of the garden and plant — a place apart where heaven and earth are most closely aligned. A boundless metaphor for the creation of order for the power of design to bring chaos under control, the botanical provides a record of cultural uniqueness, a place for personal expression and cultivation. 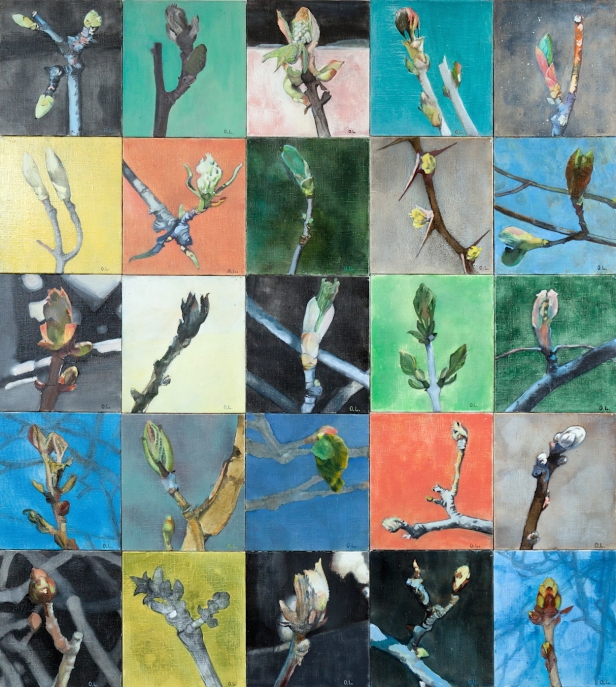 There is a concurrent complexity and simplicity in these paintings. An ordered series depicting singular blossoms (“Buds,” 2015) is the result of the artist’s meditative attention to the cyclical process occurring in nature. Observing how spring rebirths plants, Lytvynenko focuses on the cosmology of minor events and things, erasing the boundaries between the micro and the macro worlds. His flowers and buds mark the subtle progression of the seasons. Despite their recognizability, the painterly results are anything but ordinary. The blossoms also contribute abstract compositional value, providing rhythm and an organic dynamism as they bend this way and that, and they provide a unifying feature as they sometimes become one with the background.

“Water Lilies” (2012), concentrates on the water’s surface, its reflections and transparencies. With a vague nod to Monet, the artist’s deft brushstrokes, quick elliptical outlines, multi-layered surfaces manage to suggest both the subtlety and the visual excitement of his experience. The variety of effects is amazing, from the most subdued and blended modulations to brash and brilliant colors. In this painting, there is no place to stand; it turns nature upside down. We are just above the water, and, like rain or snow, we fall into it, and dissolve. 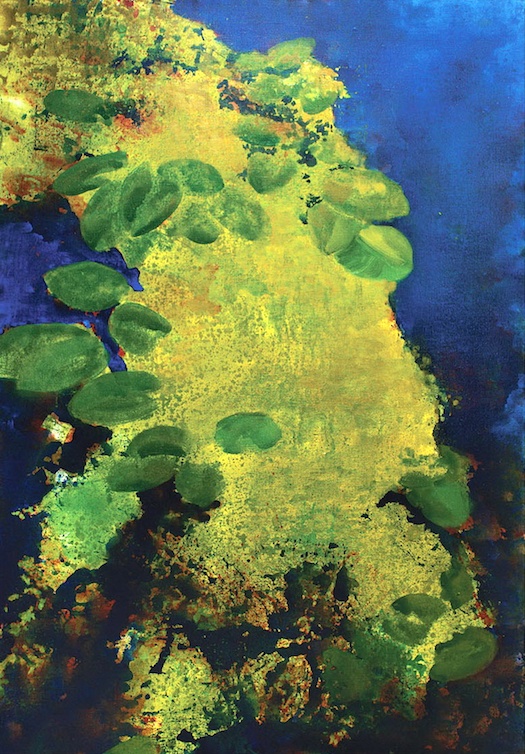 Here, representational space dissolves completely; composition is defined only by passages of color and hints of form which advance and recede. The cascading forms and floating shapes, the atmospheric and layered, which are trademark of his imagery, seem simultaneously of land, water and body. All of these works showcase Lytvynenko’s mastery of color and painterly surface while revealing his extraordinary ability to construct a distinct and ever-changing world that blurs abstraction and realism.

Deliberate references to more academic styles of painting are adapted to a subject matter that is also relatively traditional: the interior still-life on a table (“Fish/Tench,” 2017). In a cycle of seven smallish square paintings, Lytvynenko’s density of color, carefully modeled forms with combination of flora and fauna on dinner plates, sharp contrasts between light and shadow, and consummate finish in his execution also echo the supremely accomplished painterly practices of European still-life. An analogous attention to execution informs these works paradoxically implementing a more abstract vision. The subject is the picture plane; and its only spatial parameter is that of the frame. These still-lifes prioritize one creature or plant in isolation. They also imply a fragmented world view as a holistic one. 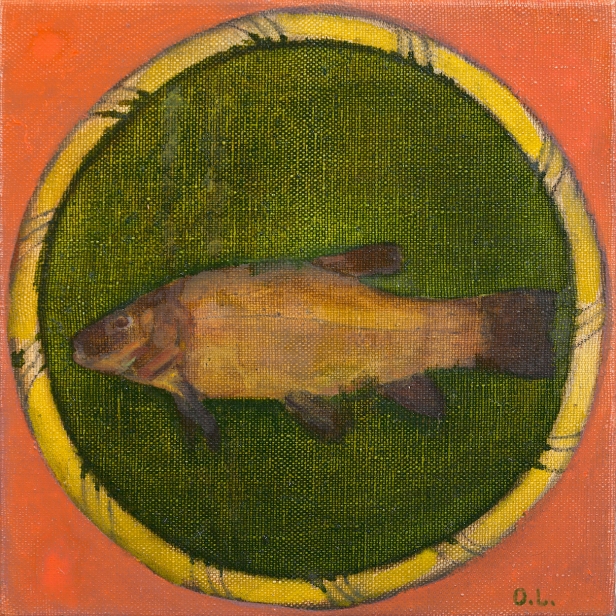 So, what in fact is the content of Lytvyneko’s painting? Acts of perception of the here and now. Contemplation. Epiphany. Love of nature. Nature as sublime. Ecological concerns. Subjects in motion as metaphors of life. Images as symbols of life and death, melancholia, emotional instability. Provocations to metaphysical questioning about what can and cannot be known. Instability evocative of poetic ambiguity. The expressiveness of flowing paint itself.

His work stems from an assured inner life and is independent of the current “tentative” fashion of contemporary art. Although he doesn’t seem to waver from the belief that art can be at once pleasurable and profound, he has to contend with general view of the former as intellectually flimsy or one-dimensional.

There is the need to spend a great deal of time and attention on these paintings, not simply to glance at the surface that has limited activity. We enter a seamless experience of measured space and the experience of visual order itself. Lytvynenko’s cycles of work represent series of ideas explored with undeniable passion and persistent experimentation that pushes the limits of creative self. I am inspired by knowing that each viewing of his work will reveal something yet unseen.

This is a look at an aspect of contemporary art from a different emphasis. It’s an examination of art’s more tranquil aspects, the search for the poetic, the metaphoric, the mysterious, and an acknowledgement of the return to a more romantic vision. Perhaps it is an attempt on my part to partially fill that deep-seated, almost forgotten longing for a sense of comfort, graciousness, and relief which is so mostly absent in our current harried life.Lytvynenko shows us that paint can more than paint on canvas, that it can lead people to a glimpse, a moment, a hint of something spiritual. There are no words for this. He operates in a place where words often fail.

Oleksiy Lytvynenko’s work has been exhibited extensively in Ukraine, Austria, Canada, France, Germany, Sweden, Switzerland, the United Arab Emirates, and the United States. He is the recipient of numerous awards for his painting from settings including the Salon International D’Art Contemporain (Nice, France) and the Soros Centre for Contemporary Art (Kyiv, Ukraine). He studied at the Kyiv State Art Institute and is a member of the Ukrainian Artists Union. Mr. Lytvynenko lives and works in Kyiv.