Honoring the memory, legacy and continued impact of Taras Shevchenko, the Ukrainian Institute of America (UIA) is featuring a series of programs dedicated to Ukraine’s bard as it joins world-wide celebrations slated for 2014, the 200th anniversary of the great poet’s birth.

The UIA kicked off its Shevchenko Bicentennial commemorations with an essay contest for youth ages 14-21. The contest’s theme, “Taras Shevchenko—Why does he matter today?” aims to promote learning and awareness of Shevchenko’s legacy by those less or not at all familiar with his life’s work. This group includes students of Ukrainian and non-Ukrainian background, whose primary language is English and whose engagement in Ukrainian history and language has been comparatively limited or absent. 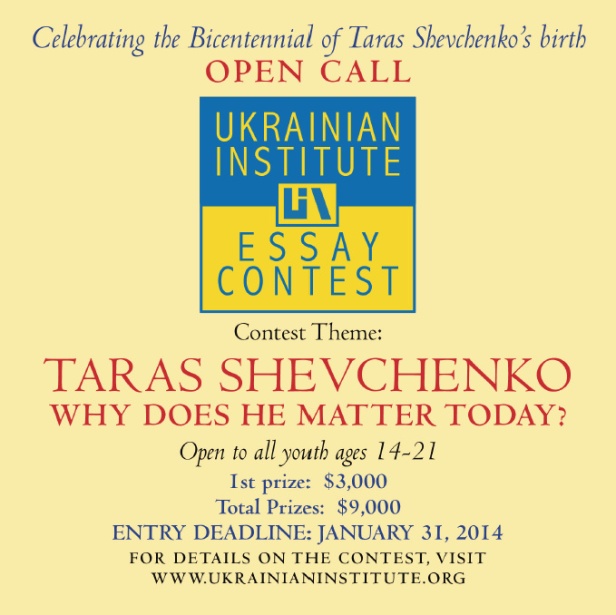 Besides the essay contest, the diverse UIA events range from a presentation of the first-ever complete English translation of Shevchenko’s Kobzar, an art exhibition denoting Shevchenko as the root of the tree of life of contemporary Ukrainian culture, a performance of Shevchenko’s poems set to the music of major Ukrainian composers, and more.
“Our Institute’s mission is to act as a ‘Window on Ukraine’, and we’re proud to take this opportunity to help acquaint the general public with this seminal figure,” says Dan Swistel, the president of the Ukrainian Institute. “Shevchenko has played a gargantuan role in the history and life of Ukrainians and Ukraine, but what Shevchenko stood for has equal meaning for the world at large today—an abiding love of one’s country, uncompromising opposition to all forms of oppression, a deep humanism. These are universal values.”

With an entry deadline of Jan. 31, 2014, the English-only essay contest carries $9,000 in total prize money: a $3,000 first prize, $2,000 second prize and $1,000 third prize. Ten essays awarded honorable mention will receive $300 each. In judging the essays, jurors will take into account the writer’s age. The top three essays, and the names of all winners, will be published on the Institute’s website; in Atlas, the Institute’s newsletter; and in the Ukrainian-American press. Top-scoring essays will also be prominently displayed at the Institute’s headquarters in New York City during the summer of 2014. Contest guidelines and entry form are available at www.ukrainianinstitute.org.

The Institute recently also hosted the inaugural presentation of the first-ever complete English translation of Shevchenko’s poetry collection, the Kobzar, by Peter Fedynsky. The translator is a United States-born retired Voice of America journalist, whose assignments took him for extended periods to Ukraine and the former Soviet Union, including as VOA Moscow bureau chief. In his introduction to the book, Fedynsky notes that Shevchenko’s poems “are alternately frightening, funny, despairing, hopeful, sacred and sacrilegious, but always illuminating and entertaining. They serve not only as a guide to long submerged, even prohibited elements of Ukrainian history, geography, personalities and folklore, but also to universal themes of love, envy, oppression and freedom.” In addition, the poems of Shevchenko, who was born a serf, “represent considerable courage, because he took on Russia’s imperial regime at a time when few would dare to challenge it.”

Joining Fedynsky in reading excerpts from the translation were Ukrainian-American poet Dzvinia Orlowsky and Bob Holman, founder and owner of New York’s legendary Bowery Poetry Club. The presentation at the Institute also featured copies of Shevchenko’s art and manuscripts and the poet’s favorite music. The UIA co-sponsored the publication of Fedynsky’s translation along with Self-Reliance New York Federal Credit Union (Samopomich) and the Temerty Family of Toronto, Canada.

In early November, the UIA also hosted a launch by the Shevchenko Scientific Society of its recent publications about the life and work of its patron, Taras Shevchenko. Among the books, all reflecting the society’s scholarly mission, is a three-volume set of the facsimile reproduction of Shevchenko’s Haydamaky, a historical perspective of the work of Orest Fedoruk, and a critical analysis by George G. Grabowicz. Another new Society book is a bibliographical volume, Shevchenko v krytytsi, of all critical literature on Shevchenko that appeared during his lifetime. Attendants of the event were also treated to a performance by Pavlo Gintov, an award-winning pianist who regularly performs with orchestras and chamber music throughout Europe, Asia and the U.S.

On March 8, 2014, Music at the Institute (MATI) will present a special concert, “Shevchenko and Shakespeare,” featuring the internationally renowned British bass-baritone Pavlo Hunka. The singer will perform a program of Shevchenko poems set to music by Mykola Lysenko, Jakiv Stepovyi, Stanyslav Liudkevych and Stefania Turkewich, and contrast that with a song cycle of Shakespearean sonnets by the contemporary Ukrainian composer Oleksandr Jacobchuk. “In this way, “ says Hunka, “Shevchenko takes his rightful place on the world stage alongside another of the world’s great poets.” Hunka, who was born to a Ukrainian father and an English mother, has performed in many of the world’s top opera houses, with leading conductors including Claudio Abbado and Zubin Metha, Jeffrey Tate, Peter Schneider and the late Richard Bradshaw. The Shakespeare song cycle was composed specially for Hunka, whose performance at the UIA will mark its world premiere. Accompanying Hunka on the piano will be Albert Krywolt, one of Canada’s foremost opera musicians.

Still another Art at the Institute program (ART@TI) dedicated to Shevchenko, the contemporary art exhibit “Root and Crown” will open March 21, 2014. A multi-faceted project consisting of constructed art, paintings and photographs, the exhibit’s idea, according to its Ukrainian artists-curators, is to present Shevchenko as “a root of the tree of life of the contemporary Ukrainian culture that constitutes a part of the human and cultural heritage of the Ukrainian people, and as a creator of visions and essences of the nation’s cultural heritage.” Artists contributing to the exhibit include Petro Bevza, Mykola Zhuravel, Oleksyi Lytvynenko and Oleg Yasenev, as well as a number of photographers who took aerial views of Ukraine. “Root and Crown” is scheduled to run through April 20, 2014.

By Roman Czajkowsky
This article was originally published in The Ukrainian Weekly.
www.ukrweekly.com