The Ukrainian Institute of America took part in the celebration of the 40th anniversary of the founding of Fiction Collective, the premier author-run publishing house of innovative fiction in America, by hosting the literary evening “Collective Memory.” The event took place on Friday, March 15, 2013 at the Ukrainian Institute of America. Participated Jonathan Baumbach, one of the publishing house’s two founders (along with Peter Spielberg), and four of its authors, Alain Arias-Misson, Steve Katz, Rob Stephenson and Yuriy Tarnawsky, some of whom are among the first to have been published by the Fiction Collective.

The importance of Fiction Collective and its direct successor, Fiction Collective Two, or FC2, in American literary life cannot be overestimated. It ushered in a new wave of bold and talented writers who dared to withstand the temptation to subjugate their creativity to the demands of big-house publishing executives’ tastes and to consider themselves free artists, as deserving of reaching the reading audience as their more famous, commercially oriented colleagues. 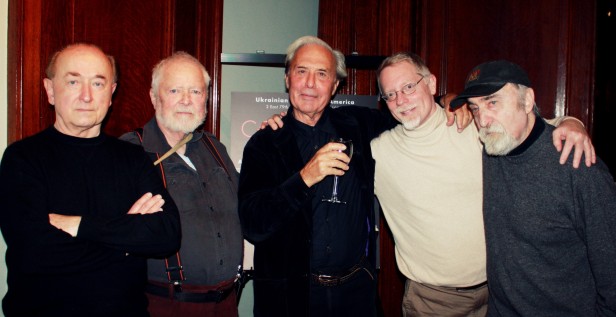 Mr. Arias-Misson has published five novels and four art books, and his stories have appeared in reviews such as Partisan Review, Paris Review, Brooklyn Rail, Fiction International, Evergreen, Black Scat in the U.S. and Luna Park in Paris as well as in numerous anthologies. His “literal objects” have been shown in museums and galleries around the world and his “public poems” enacted in the streets of a score of cities.

Mr. Baumbach has published 15 books of fiction, including most recently Dreams of Molly and YOU. Flight of Brothers will be out in June. He has published over 85 stories in such places as Esquire, American Review, O.Henry Prize Stories, All Our Secrets are the Same and Best American Short Stories.

Mr. Katz won the America Award in Fiction in 1991 with “Swanny’s Ways.” He has authored many books of fiction and poetry, as well as screenplays and small films. Recently he published “Antonello’s Lion”; his new book “The Compleat Memoirrhoids” will be released this fall.

Mr. Stephenson has been creating texts, music, video, films, paintings, drawings, and installations for over 30 years. He is the author of novel “Passes Through” (FC2). He received an outstanding achievement award from The Center For Experimental and Interdisciplinary Art. His drawings have been exhibited and his film, music and video projects have been presented at venues throughout the United States.

Mr. Tarnawsky has authored more than two dozen books of poetry, fiction, drama, essays, and translations, in Ukrainian and English. His fiction books include “Meningitis,” “Three Blondes and Death” and “Like Blood in Water” (all FC/FC2), and the collection “Short Tails” (JEF Books). His most recent publication is a collection of essays in Ukrainian “Flowers for the Patient” (Piramida Publishing). For his contributions to Ukrainian literature, in 2008 he was awarded the Prince Yaroslav the Wise Order of Merit by the Ukrainian government.

After the program, the authors’ books were available for purchase and the audience had the opportunity to meet the authors during the reception.