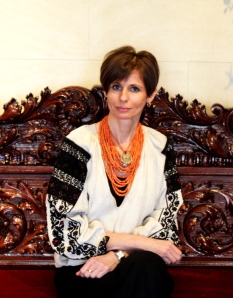 Sofika, a native New Yorker, started making pysanky and ceramics when she was six, having learned the basics of these traditional Ukrainian art forms from her mother. What began as a hobby has through the years developed into a professional pursuit. She has lectured and exhibited her work most notably at the Metropolitan Museum of Art, the American Museum of Natural History, the American Craft Museum in New York and the Embassy of Ukraine in Washington, D.C. Interviews with Sofika have been published in New York Newsday, The World and I and The New York Daily News. In 1993 a bilingual book on “The Art of the Pysanka” by Sofika was published in Ukraine.

The art of the decorated egg, or the “pysanka” (from the Ukrainian verb “pysaty” or “to write”) dates back to pagan times. Folk tales reveal that people who lived in the region now known as Ukraine worshipped the sun. It warmed the earth and therefore was a source of all life. Eggs decorated with symbols of nature were chosen for sun worship ceremonies and became integral to spring rituals as benevolent talismans.

With the acceptance of Christianity in 988 AD, the decorated pysanka (plural – pysanky) continued to play an important role in Ukrainian rituals. Many symbols of the old sun worship survived and were adapted to represent Easter and Christ’s Resurrection.

A pagan legend maintained that the sun god was the most important of all the deities; birds were the god’s chosen creatures for they were the only ones who could get close to him. Humans could not catch the birds, however, they could obtain the eggs laid by the birds. Thus, eggs were magical objects, a source of life.

The Hutsuls — mountain people of Western Ukraine – believed that the fate of the world depended upon the pysanka. As long as the egg-decorating custom continued, the world would exist. If this custom was abandoned, evil – in the form of a horrible monster, forever chained to a mountain cliff – would overrun the world. Each year this monster-serpent would send out his henchmen to see how many pysanky were created. If the number was low, the serpent’s chains were loosened and he was free to wander the earth causing havoc and destruction. If, on the other hand, the number of pysanky increased, the chains were tightened and good would triumph over evil for yet another year.

Throughout the centuries, symbols on the pysanky, created using a batik (wax-dye) method, have endured and adapted to reflect changes. The triangle, which in pagan times meant air, fire and water or birth, life and death, in Christian times took on the meaning of the Holy Trinity. Grapes, a symbol of good harvest became a symbol for the church. Wheat or pine branches continue to signify health. Flowers and birds stand for happiness and spring. Hens and chickens symbolize fertility. Roosters are identified with masculinity and strength, as are oak leaves. Infinite lines signify fertility. Deer are strength and prosperity. Fish, also symbols of prosperity, represent Christianity as well.

According to custom older people should receive pysanky with darker colors and/or rich designs for their life has already been filled with experiences. It is appropriate to give young people pysanky with white as a predominant color because their life is a blank page ready to be filled.

Girls should never give their boyfriends pysanky that have no design on the top or bottom of the egg – the baldness on either end signifies that the boyfriend will soon lose his hair.